The Conqueror of the Desert: William Wallace III

The Conqueror of the Desert: William Wallace III

Appearance: Short, black spiked hair; muscular, but thin slender body; burn scar going down his chest; Always wearing some kind of sunglasses and a hat of some sorts to differentiate himself from the rest of the wrestlers.

Wrestling Gear: Black, mid-long shorts extending to his knees with the logo “WW3” going down the sides; Black and white armbands on both forearms with the same “WW3” logo;

Nicknames: "The Conqueror of the Desert"; "The Prodigal Enigma"

Backstory: Around the age of 10 years old, William’s mother (Heather Marie Wallace) and father (William James Wallace II), were murdered by his 17 year old brother (Brandon James Wallace) in cold blood. Some say he killed them out of jealousy, others say Brandon was twisted from the womb. William Wallace has resented his brother for years, even though Brandon is currently serving a life sentence in prison. At the age of 17, William discovered his love for wrestling. It was the only thing that took away the pain he felt deep in his heart over the loss of his family. He wrestled independently for 3 years, before finally getting a call up from Cyopathic to join the wrestling federation: Desert Dispatch Extreme. William hopes to find a new home, and family, in this roster. He will look to gather titles and great accomplishments throughout this federation. He only hopes that he can live up to his father’s expectations of him, and that one day he may escape the shadow that has haunted him the past 10 years.

Personality: He is rather rude, and unwelcoming to new people due to his dark history. But once he warms up to whomever he comes into contact with, he is rather a nice guy who just wants to fulfill his legacy. He will let nothing, or no one, stand in his way to the top.

Alignment: Face, who may go to heel-ish lengths to accomplish his goals.

Wrestling Style: Onslaught of aerial maneuvers, mixed with aspects of karate and submissions he has obtained over the past 10 years to solidify his legacy. Not to be mistaken for a hi-flyer, for he just likes to hit flashy moves to keep the crowd entertained. 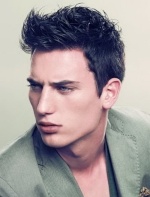